Would you like to switch to the accessible version of this site?

Don't need the accessible version of this site?

You may find it both helpful and fruitful to write down statements and comments made by men and women who have thought and felt deeply. A problem with quotations is that they can lose their intended meaning out of context; however, maxims and insights can stand on their own.

Good psychotherapy and well phrased observations or truths are tributes to discovery and empowerment. They allow us to recognize the world in us and ourselves in the world. Or, in the words of Marlene Dietrich: "I love quotations because it is a joy to find thoughts one might have, beautifully expressed with much authority by someone recognized wiser than oneself." 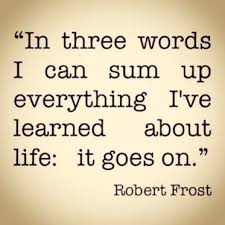 "It is not enough to have great qualities; one must know how to manage them."
-La Rouchefoucauld

"It is easier to know man in general than to understand one man in particular."
-La Rouchefoucauld

"There are few things we should keenly desire if we really understood what we wanted."
-La Rouchefoucauld

"A goal without a plan is just a wish."
-Antoine de Saint-Exupery, The Little Prince

"What saves a man is to take a step. Then another step. It is always the same step, but you have to take it."
-Antoine de Saint-Exupery, The Little Prince

"If I were to command a general to turn into a seagull, and if the general did not obey, that would not be the general's fault. It would be mine."
-Antoine de Saint-Exupery, The Little Prince

"The only thing necessary for the triumph of evil is for the good men to do nothing."
-Edmund Burke

"In questions of science, the authority of a thousand is not worth the humble reasoning of a single individual."
-Galileo Galilei

"We know of no one but Xerxes who was so intoxicated with his power as to say to the waves, 'Thus far shall ye come, and no farther.' The waves, however, did not retreat from Xerxes, but Xerxes from the waves, and, if not for this wise but humiliating precaution, he would have been drowned."
-Claude Frédéric Bastiat

"Our greatest glory is not in never falling, but in getting up every time we do." (Confucius)

“The most formidable weapon against errors of every kind is reason. I have never used any other, and I trust I never shall.” (Thomas Paine, The Age of Reason)

“How many legs does a dog have if you call the tail a leg? Four. Calling a tail a leg doesn’t make it a leg.” (Abraham Lincoln)

"Remember this: one can be a strict logician or grammarian and at the same time full of imagination and music.” (Hermann Hesse, The Glass Bead Game)

Mallory looked at him incredulously and whispered:
"How did you know that?"
Roark smiled and said nothing.
"How did you know what's been killing me? Slowly, for years, driving me to hate people when I don't want to hate.... Have you felt it, too? Have you seen how your best friends love everything about you—except the things that count? And your most important is nothing to them, nothing, not even a sound they can recognize. You mean, you want to hear? You want to know what I do and why I do it, you want to know what I think? It's not boring to you? It's important?"
"Go ahead," said Roark.
Then he sat for hours, listening, while Mallory spoke of his work, of the thoughts behind his work, of the thoughts that shaped his life, spoke gluttonously, like a drowning man flung out to shore, getting drunk on huge, clean snatches of air.


“Some see private enterprise as a predatory target to be shot, others as a cow to be milked, but few see it as a sturdy horse pulling the wagon.” (Winston Churchill)

“Of all the unhappy people in the world, the unhappiest are those who have not found something they want to do.” (Lin Yutang)

“No people can be great who have ceased to be virtuous.” (Samuel Johnson)

“Tell me one last thing,” said Harry. “Is this real? Or has this been happening inside my head?”
“Of course it is happening inside your head, Harry, but why on earth should that mean that it is not real?” Harry Potter Spoken by Albus Dumbledore

“We’ve all heard that a million monkeys banging on a million typewriters will eventually reproduce the entire works of Shakespeare. Now, thanks to the Internet, we know this is not true.” (Robert Silensky)

“The individual has always had to struggle to keep from being overwhelmed by the tribe. If you try it, you will be lonely often, and sometimes frightened. But no price is too high to pay for the privilege of owning yourself.” (Friedrich Nietzsche)

“It is not the critic who counts, nor the man who points out where the strong man stumbled, or where a doer of deeds could have done them better. The credit belongs to the man in the arena whose face is marred by dust and sweat and blood, who strives valiantly, who errs, and who comes up short again and again, who knows the great enthusiasms, the great devotions, and spends himself in a worthy cause. The man who at best knows the triumph of high achievement and who at worst, if he fails, fails while daring greatly, so that his place will never be with those cold timid souls who never knew victory or defeat.” (Teddy Roosevelt)

“No bird soars too high, if he soars with his own wings.” (William Blake)

“When I was a boy I was told that anybody could become President; I’m beginning to believe it.” (Clarence Darrow)

"It does not do to dwell on dreams and forget to live." Harry Potter and the Sorcerer's Stone
Spoken by Albus Dumbledore

"Do whatever you will, but first be such as are able to will." ( Friedrich Nietzsche)

"If my aim is to prove I am "enough," the project goes on into infinity--because the battle was already lost on the day I conceded the issue was debatable."
-Nathaniel Branden

"The perfect is the enemy of the good."
- Voltaire

"If you want to increase your success rate, double your failure rate."
- Thomas J. Watson

"T wo and two make four. Nature doesn't ask your advice. She isn't interested in your preferences or whether or not you approve of her laws. You must accept nature as she is with all the consequences that that implies."
-Fyodor Dostoyevsky

"To forget one's purpose is the commonest form of stupidity."
-Friedrich Nietzsche

"Great minds have purposes, others have wishes."
-Washington Irwing

"To be what we are, and to become what we are capable of becoming, is the only end in life."
-Baruch Spinoza

"Time cools, time clarifies; no mood can be maintained quite unaltered through the course of hours."
-Thomas Mann

"Most of the harm in the world is done by good people, and not by accident, lapse, or omission. It is the result of their deliberate actions, long persevered in, which they hold to be motivated by high ideals toward virtuous ends."
-Isabel Paterson

"To do just the opposite is also a form of imitation."
-Georg Christoph Lichtenberg

"What matters the party to me? I shall find enough anyhow who unite with me without swearing allegiance to my flag."
-Max Stirner

"Living never wore one out so much as the effort not to live."
-Anais Nin

"To think and to be fully alive are the same."
-Hannah Arendt

"Many persons have a wrong idea of what constitutes true happiness. It is not attained through self-gratification but through fidelity to a worthy purpose."
-Helen Keller

What does your conscience say?-- You shall become the person you
are.

Where are your greatest dangers?-- In self-pity.

Whom do you call bad?-- Those who always want to put to shame.

What do you consider most humane?-- To spare someone shame.

What is the seal of liberation?-- No longer being ashamed in front of
oneself."
- -Friedrich Nietzsche

"To think bad thoughts is really the easiest thing
in the world. If you leave your mind to itself it
will spiral down into ever increasing
unhappiness. To think good thoughts, however,
requires effort. This is one of the things that
discipline - training - is about."
-- James Clavell, "Shogun"

"To know and not to act is not to know at all."
--Japanese proverb

"I must die. I must be imprisoned. I must suffer exile. But must I die groaning? Must I whine as well? Can anyone hinder me from going into exile with a smile? The master threatens to chain me: what say you? Chain me? My leg you will chain--yes, but not my will--no, not even Zeus can conquer that."
-- Epictetus

"The creative members of an orthodoxy, any orthodoxy, ultimately outgrow their disciplines."
--Irvin D. Yalom

"He who joyfully marches in rank and file has already earned my contempt. He has been given a large brain by mistake, since for him the spinal cord would suffice."
-- Albert Einstein

"A setback is a set-up for a comeback."
--Anonymous

"What's that you say? Hopeless?--Why, very well!--But a man does not fight merely to win! No--no--better to know one fights in vain! ..."
-- from Cyrano de Bergerac by Edmond Rostand

"It is not from the benevolence of the butcher, the brewer, or the baker that we expect our dinner, but from their regard to their own interest."
-Adam Smith

“Live with your century, but do not be its creature.”
--Friedrich Schiller

“An individual can be hurt in countless ways by other men's irrationality, dishonesty, injustice. Above all, he can be disappointed, perhaps grievously, by the vices of a person he had once trusted or loved. But as long as his property is not expropriated and he remains unmolested physically, the damage he sustains is essentially spiritual, not physical; in such a case, the victim alone has the power and the responsibility of healing his wounds. He remains free: free to think, to learn from his experiences, to look elsewhere for human relationships; he remains free to start afresh and to pursue his happiness.”
--Leonard Peikoff

"To understand that the sky is everywhere blue, we need not go round the world."
-Johann Wolfgang von Goethe

"All truly wise thoughts have been thoughts already thousands of times; but to make them truly ours, we must think them over again honestly, till they take root in our personal experience."
-Johann Wolfgang von Goethe
"To argue with a man who has renounced his reason is like giving medicine to the dead."
-Thomas Paine